When you think of Haiti, you might think earthquakes, violence, poverty, smoke bombs, rubble. Yes, the country is perpetually in crisis, and that affects everyone there, but Haiti is also full of energy, intellect, bright new ideas and humour. In this podcast series, I try to cut through the tangle of bleak imagery we see in the news, and introduce you to the everyday Haitians living interesting lives in extraordinary times. Theme music: Bayo, by Michael Brun (used with permission and thanks).

Education is precarious at the best of times in Haiti. Overcrowded, underesourced and few and far between, many schools struggle to provide students with even the basics. Lakou Kajou is a bright spot in this panorama. It’s a series of videos and other educational media distributed to schools around the country. It is produced by the US based NGO, Blue Butterfly, in assocation with Haitian artists, designers and educational experts. The videos are bright and cheery, well-made, and... in Haitian Creole, which as we will hear, is quite unusual. After some resistance, the videos have been well-received by students, parents and teachers. Then the pandemic hit, and the team had to scramble once again to reach Haitian students. Production manager, Alexandrine Benjamin tells us her story. 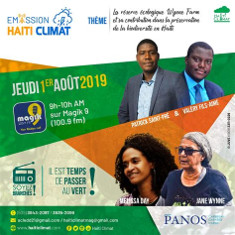 Phares Jerome and Patrick St Pre are two veteran journalists in Haiti. They both work for Le Nouvelliste, the country’s only print newspaper as well as Haiti’s only environmental news outlet Haiti Climat, which St Pre co-founded. Their currently working on a project, funded by the Society for Environmental Journalists, to look at the state of the country’s fledgling Marine Protected Areas. I’m also working with them on the project. In this conversation, they explain that while the ongoing political turmoil in the country might be daily bread for some reporters, it's a distraction for those who want to dig deeper. Big thanks to Marc at Panos Haiti for recording us. 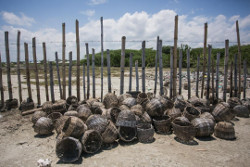 In Haiti, nobody lives more than 100 kilometers from the sea. Nine of the country's ten departments have coastline. Yet, the coastal ecosystems are on the verge of disappearing. My guest today is Jean Wiener, a Haitian marine biologist and activist who leads one of the country's few environmental organization: FoProBim. FoProBim works to save local fisheries and clean up beaches. Last year, the organization signed an agreement with the government to co-manage the country's tiny Marine Protected Areas. The group has its work cut out for it. Until recently, those areas have had little management and no enforcement. Meanwhile thousands of fishermen depend on them for day-to-day survival. Wiener began our conversation by telling me how he became interested in conservation as a young child. (Photo: FoProbim). My colleagues at Haiti Climat will soon publish a series of stories about Haiti's Marine Protected Areas with the support of the Society of Environmental Journalists. Find out more by following #neglectedwaters. 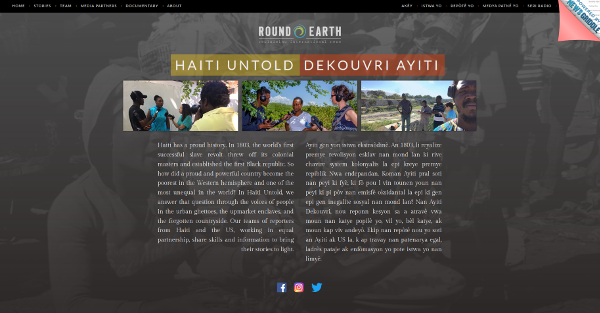 Check out Haiti Untold a reporting project about inequality in Haiti

Michael Brun. Brun grew up in Haiti, studied in the US, and was preparing for a quiet middle class professional life when a chance posting online turned that all around. Since then he's penned an anthem for the World Cup, recorded with J Balvin, played Coachella and toured the world. He hasn't forgotten his roots, though. He founded a record label, Kid Coconut, to promote Haitian music and mentors young Haitian musicians back home. 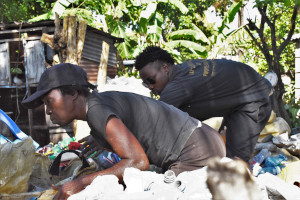 Augustine Desauguste, better known as Blada, grew up next to a pile of garbage, a memory he could never quite forget. After a promising career as a dancer and a move to the US, he knew he had to do something. Against all odds -- not least the resistance of many locals -- he built the first and only recycling depot in a town drowning in garbage. In this episode, we hang out with the employees of the depot and hear Blada's own extraordinary story. Webpage of Kay Blada recycling.

Harold Isaac has had a front row seat to Haiti's tumultuous politics quite literally since the day he was born. Through it all, he has managed to keep a positive outlook and a wry sense of humour, as well as one foot in a more peaceful world back in Montreal. In this conversation, Harold gives us a neighbour-next-door take on Haiti today and forty years ago, when the last dictatorship fell. Webpage of Radio Kiskeya